﻿﻿﻿﻿
I begin my day by checking our general library inbox for any enquiries that we might have received over the weekend. This morning [as usual] there were quite a few but they were mercifully straight forward so didn’t take too long to answer. Next, I spent a very enjoyable hour squirrelling away through our old photograph drawers for some interesting images to share with everyone during this Museum Week UK  on Twitter and what treasures I have found [but more of that to come via Tweets from @amgueddfa_lib during the week]!
﻿﻿
I also took some photographs of the pages of a giant old scrap book full of museum ephemera; it contains tickets, pamphlets, public announcement posters, order of services, lists of lectures and just about anything else [museum related] you can stick down with heavy duty glue and sellotape… 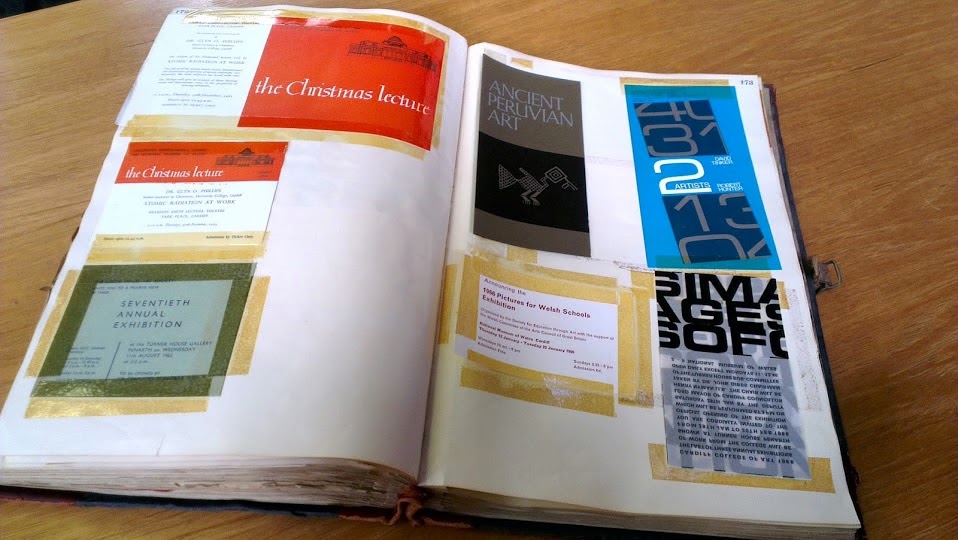 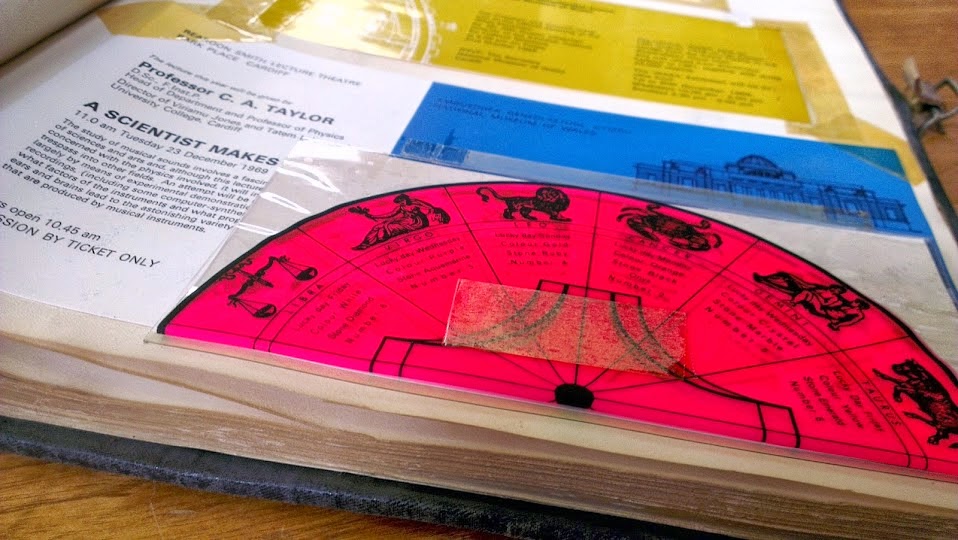 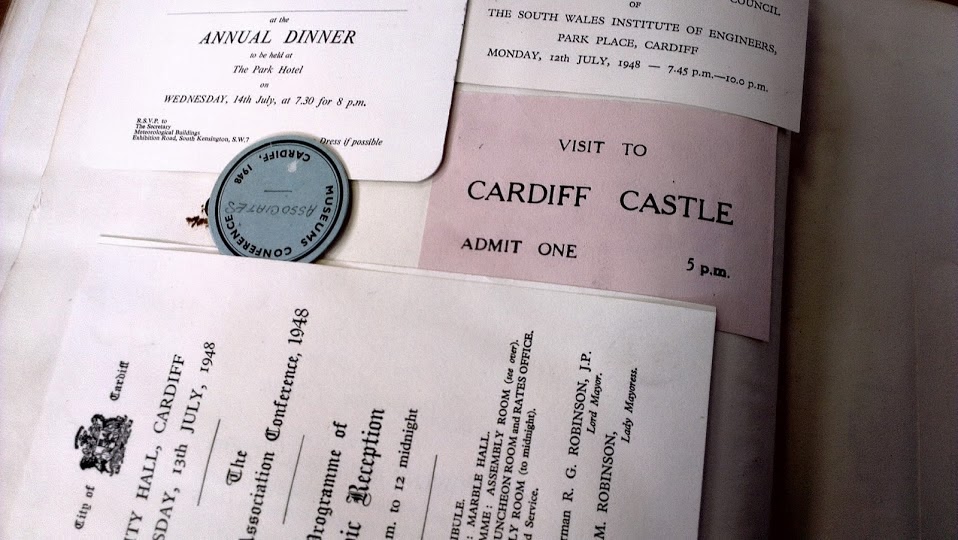 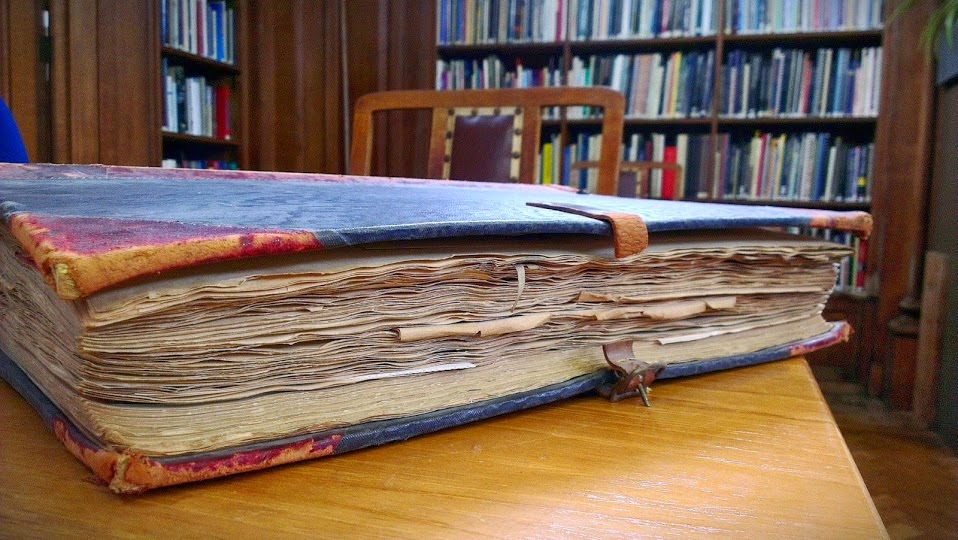 However, my day begins in earnest with the post – as Assistant Librarian one of my main priorities is to manage the journal subscriptions. We maintain around 700 titles, a combination of paid subscriptions, exchanges and gifts. Therefore, after our Administration Assistant has opened and checked it, I weed out all the journals and record them onto our database. By doing this I am alerted to previous issues not received and will then chase them up with relevant suppliers. This time, there are no missing issues to chase but we have received a few duplicates, and [as always] these are from suppliers who categorically promised that no further duplicates would be sent out! Next, I count and measure the post so that at the end of the year I am able to supply our Principle Librarian with the total number of actual issues received and the meterage of space they will have covered. For instance, our statistics for 2013 were 1972 issues received that covered just over 11 metres of shelf space
﻿﻿﻿﻿﻿﻿﻿﻿﻿﻿﻿﻿﻿﻿﻿
Next, I date stamp and separate them into departments. Our subscriptions naturally correspond with the curatorial departments, so we receive journals on the following disciplines: Art, Archaeology, Zoology, Botany, Geology and Industry and we also subscribe to more general subjects kept here in the Main Library. Once all this is done, it’s time to go and shelve them in the departmental libraries. These are dotted all around the museum so I wait until I have a little pile, normally a few days’ worth, before I go on my shelving travels.
My next task is to work through any invoices received in the post and this morning there quite a few. The way I process these has changed recently and whereas it has taken a little time to get used to the new system, it is much more straightforward and done in no time at all.﻿﻿
﻿﻿

After lunch, it’s all about the special collections! I begin by photographing books for a new post on the Museum Blog; I have been posting articles for some time now and really enjoy it. This next post I’m working on concerns books with “marginalia” and we have some excellent examples so here is a little sneak peak…﻿﻿
﻿﻿﻿﻿﻿﻿﻿


The last few hours of the afternoon are spent working on a talk I will be giving in April as part of the Museum’s Behind the scenes series where the curatorial departments allow groups of visitors in to show them what goes on behind the scenes. My working title is “Curios” and the talk will be based on a small selection of our more unique items, such  as fore-edge books, annotated books, and books made from unusual materials and bindings!


On my way out I leave via the art galleries, it does take a little longer to get out going this way but it gives me the chance to browse and see what's on display and today there were two things in particular I wished to see. First, the new exhibition Wales Visitation: Poetry, Romance and Myth in Art which includes works by  David Jones, Graham Sutherland and Richard Long. And also the new Constable painting [currently on loan from the Tate]; Salisbury Cathedral from the Meadows  is a stunning work and I particularly like the dark storm clouds brooding behind the rainbow.
﻿﻿﻿﻿
This post has been produced as part of the Twitter event #Museum Week UK [24-30 March 2014]
All photographs in this post taken by the author﻿﻿
Posted by Jenny at 14:19