For those of you who just had a heart attack thinking that someone can work THAT fast [I just posted Thing 19 a few days ago]... calm yourselves; I started CPD23 back last June. I fell behind quite quickly but not because I was lazy or couldn't be bothered. A close relative became very ill and  dealing with that took up a massive amount of time; you really need to go through it to appreciate how exhausting worry and stress on that level can be. But, I'm not a quitter; I can be slow yes [infuriatingly so!] BUT if I start something I WILL finish it [with the sole exception of Kate Mosse's Labyrinth].

However, the main reason I intend to fnish this course is because I just happen to have loved every minute if it. I was pretty overwhelmed at first but qickly settled down and started enjoying meeting and greeting the new "Things" each week.  It's a nicely structured course, with detailed parametres [for those that require them], very clear and consice information about the Things, and lots of helpfull comments and contact details bouncing about the place creating a vibrant and welcoming community.

I have enjoyed writing this blog so much and along with all my CPD posts you will also find posts relating to daily life in my place of work, interesting and humorous books we hold in our vast plethora of departmental libraires and [of course] the cutest little picture posts relating to my bushy-tailed namesake. So do please visit my blog and sign up to follow me, I currently only have 11 followers which is quite frankly embarassing! I have also loved using Twitter and find it by far the best tool for keeping up to date with what's happening in the library community, especially whe you follow the hash tags for all those brilliant events and conferences you can't get to, it's almost like being there...well not really but it's better than nothing.

My colleague Kristine recently organised a meet up for all you new CPD starters [in the Cardiff area] and I went along too and was really relieved to discover that I am but one of MANY who didn't make the finish deadline last year!

And I must say that librarians are by far the most friendy people but they do seem to have an insatiable penchant for CAKE and COCKTAILS :-)

Email ThisBlogThis!Share to TwitterShare to FacebookShare to Pinterest
Labels: cpd23 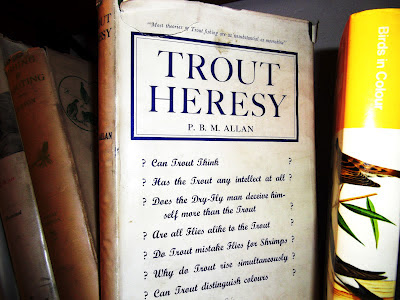 Discovered down in our Cardiff Naturalists' library - surely, only the deepest indignation could possess a person to use the word "heresy" with regards to such a gentle past-time :-)
Posted by Jenny at 08:08 No comments:

How lovely is this Rupert Bear annual?
Now take a closer look at the attentive, plucky wee fellow on the right - is he not the cutest little red you ever did see?

To be honest, I was never a great fan when I was little - Rupert was alright and even as a child I appreciated the beautiful annuals [although nothing would ever match my beloved and unashamedly girly Twinkle books] but there wasn't much humour in the stories as there was with say Winnie the Pooh and Paddington Bear and he did have some really wierd friends like that hideous little twiggy thing that must surely still be the stuff of night mares to any child? I refuse to even post a picture of it here to illustrate my point - look it up and you'll see.

Rupert was originally created as a comic strip for the Daily Express during the 1920s by Mary Tourtel but when she retired the artist Alfred Bestall took over and he is responsible for these delightful annual covers. He tended to put the same characters on the covers so this squirrel shows up quite a bit.


There's a heart felt homage to Rupert here on Brian Sibley’s blog that also contains a link to a Chris Beetles’ sale  in November last year that contained some of Bestall's works along with all manner of other gorgeous illustrations [The Illustrators 1837-2011].

So here’s to the bushy-tailed, wide-eyed, flame-furred, little scamp clutching at his branch and gazing in adoration at dear old Rupert – Squirrel Library salutes you :-)
Posted by Jenny at 14:37 No comments:

Some time to think about how you might integrate the Things so far into your workflow and routines...
﻿﻿
﻿﻿

Well for starters, I really didn’t think I’d STILL be doing this course in May! When the news about the certificates came out back last year and we were told that in order to get one we’d have to finish by November, I remember telling my colleague Kristine [who by the way, finished on time] that even though there was no way I was going make the deadline, I’d definitely be finished by the end of January… famous last words.

When I first started CPD I was completely overwhelmed at all the things we were covering and thought I’d never have the time to integrate any of them into my working day. Then of course I got over excited and started using everything and got into a bit of a muddle and stopped the lot. Now, things have settled down and I’ve stuck with a few good tools.


A really big thing for me has been writing this blog; I love it and know I'll continue with it long after CPD is but a distant memory. I have created something that is unique to me and even though hardly anyone ever looks at it, I'm still very proud of it. It also works very well as a blogger news reel as I receive RSS feeds from an ever growing list of fellow bloggers and I get to see immediately anything interesting is posted. It has also allowed me to embrace my creative side as I started taking and posting my own photographs  and realise that I'm rather good at it.

Another great change is using Twitter and I feel about it very much the same way as Trinidad Librarian; I love using it but still don’t go on it anywhere nearly enough. I go through phases of constant use and then weeks pass by with hardly anything. I’m hoping this will change when I finally upgrade my tattered [yet beloved] mobile and get one with internet access, which I’ll do very soon. I have created lists of lots of librarians and organisations and enjoy seeing what they’re all up to [I’ve also created lists of celeb crushes but this is hardly the place to tell you about them J]. I think I get the most out of my Welsh librarians list; hearing about great work and best practice right on my front door step and have also made some valuable contacts here too.

Finally, the most profound change starts with a negative; those other things I started but haven’t kept up with: LinkedIn, Evernote, Google Calender, Dropbox and Pushnote [to name but a few]. But, it was always going to be like this and the really important and positive thing is that I KNOW about these things now. I can tell people about them and show people how to use them and even use them myself if I need to [!] and this has had the biggest impact with regards to my workflow and routines - I'm different, more knowledgeable and therefore much more confident.
Posted by Jenny at 10:57 No comments: