Our museum during the Great War

This post is a synopsis of a Behind the Scenes event I presented in September looking at a “snapshot” of Amgueddfa Cymru - National Museum Wales' working activities during the WWI period.

My research entailed scanning Annual Reports, scrap books, publication archives and photographic collections for the years 1914 to 1918 and picking  out interesting items of news concerning  staff and exhibitions.


However, the first thing I did was to warn everyone that in 1914 this is what we looked like…. 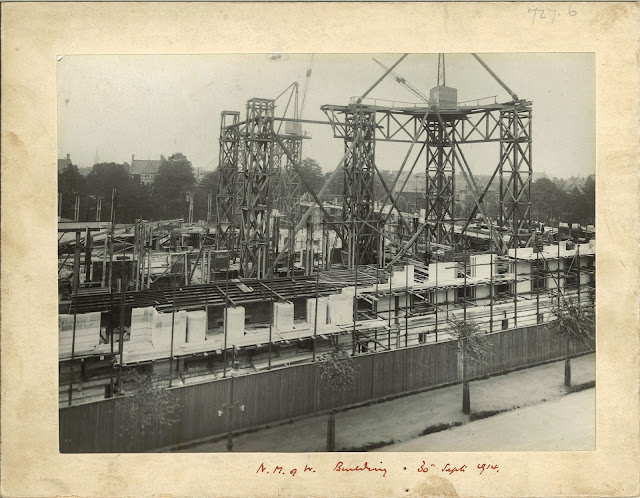 We still existed of course, established by Royal Charter back in 1907 but without a finished building to call our own.

Therefore, during the years while construction of the building was in progress, administration was carried out in offices close by at Park Place and the Kingsway area while exhibitions were held in temporary galleries next door in City Hall. 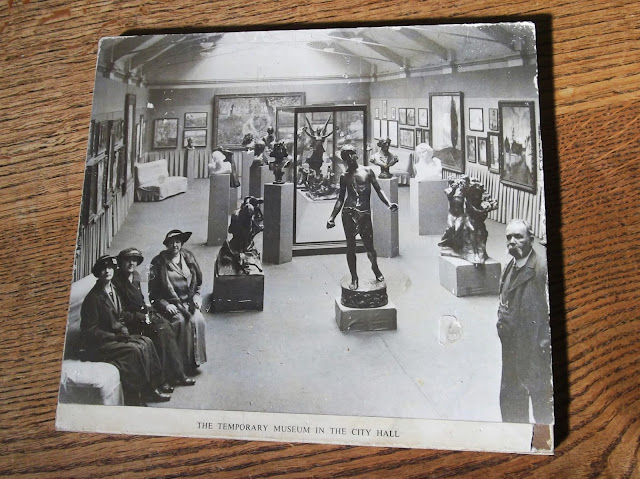 I centred the staff news around three people:

Archibald H. Lee, the Museum Secretary, who saw active military service and was decorated with the Military Cross after fighting at Gaza. He returned to work after the war and remained Museum Secretary for 44 years, finally retiring in 1953. He appears in many photographs of special events and royal visits over the years.

Cyril Mortimer Green, who was appointed as Botanical Assistant, but never took up his post. He held a Commission in the  3rd Royal Sussex Regiment, went abroad to fight and was killed on active military duty in November 1917. His death is all the more poignant because, not only did he never take up his position at the Museum, his brother Hugh Mortimer Green had also been killed on active duty back in 1915.

Click  here [and scroll down] for more information on Cyril and his brother.


Eleanor Vachell, spirited and outstanding amateur botanist who stepped in to take charge of the botany collections, while Cyril Mortimer Green was absent on military duty. She did this, with the help of pupils from Cardiff High School for Girls, whilst also supporting the war effort as one of the ‘Committee Ladies of the Auxiliary Workers Territorial Forces Nursing Association’ at the hospital set up in Howard Gardens, working as both nurse and librarian.
Eleanor was the daughter of Charles Tanfield Vachell [1848-1914], he was secretary and president of  Cardiff Naturalists' Society for many years, instrumental in the creation of the Cardiff Municipal Museum and, a member of the National Museum Wales council for some years from 1908 onwards. Eleanor compiled, with her father, the Vachell herbarium that contains 6,705 dried specimens and is one of the most complete herbaria ever collected by a private individual. This is now held here at the museum along with a very large collection of their own personal library on British floras.
I also looked at the problems faced in the construction of the building due to a lack of basic materials that had been re-allocated for the war effort. The progress must have been excruciatingly slow and all material orders had to apply via license applications to The Ministry of Munitions and the Report for 1917/18 reports that work was suspended completely for a time…

Unfortunately it has become necessary to suspend work on the New Building, and an agreement terminating the contract has been entered into with the builders, Messrs J. Willcock & Son. The roof had already been completed and the windows have been filled with oiled canvas so that the structure is now weather proof… Some of the rooms in the New Building are already in use for storage of specimens. NMW Annual Report p. 9
One of the most enjoyable parts of researching this talk was looking at the exhibitions that were held through the war years. War notwithstanding, the museum had an obligation to the public to carry on programming exhibitions and events. Here are just a few of the many exhibitions held at City Hall and for which we hold the original catalogues:


Lovett Collection of Toys
Mr Edward Lovett, of the Folklore Society, whose Collection of Dolls aroused such interest when on exhibition in the Temporary Museum two years ago, offered to lend his unique Collection of Children’s Toys and Playthings for exhibition… It had originally intended to close the exhibition on August 16th 1915 but in view of the interest it aroused, and to give school children an opportunity of visiting it during the whole of their holidays, the date of closing was postponed to September 2nd.
The total attendance was 21, 889.
I also found mention of a number of war related exhibitions held at City Hall but for which we do not hold catalogues…


British Battle Photographs [in colour]
An exhibition lent by the Ministry of Information. This was opened November, 1918. It closed on the 11th December, and was visited by about 3,500 people.


I concluded by showing two other items held here in the Library that are connected with WWI. The first was volume of military portraits of soldiers from the Welsh Horse Yeomanry. This regiment did not exist before the Great War. It was formed in August 1914 under the administration of the Glamorgan Territorial Force Association and headquartered in Cardiff [Sophia Gardens]. The title page states that the album was presented to Alderman J. Robinson, who was Lord Mayor of Cardiff (1913–1914) and it was donated to the Library on the 27th April 1932 by Councillor R. G. Robinson.
http://www.1914-1918.net/welshhorse.htm 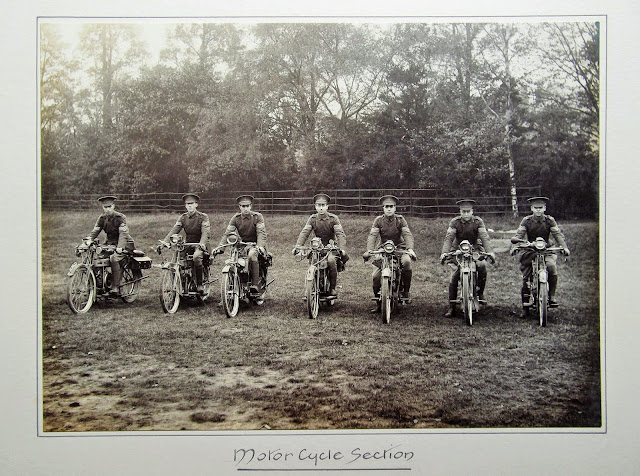 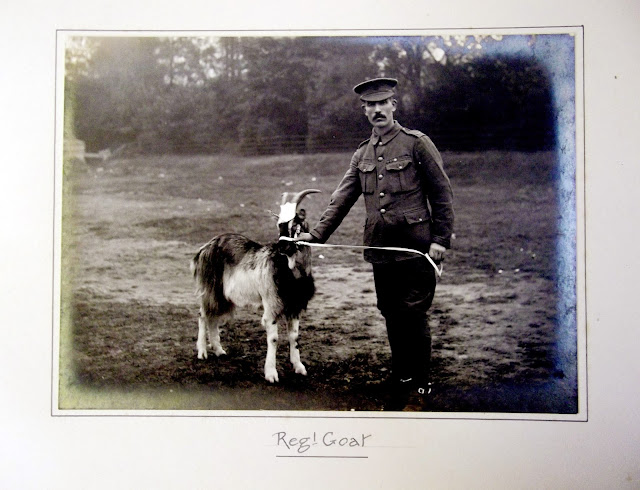 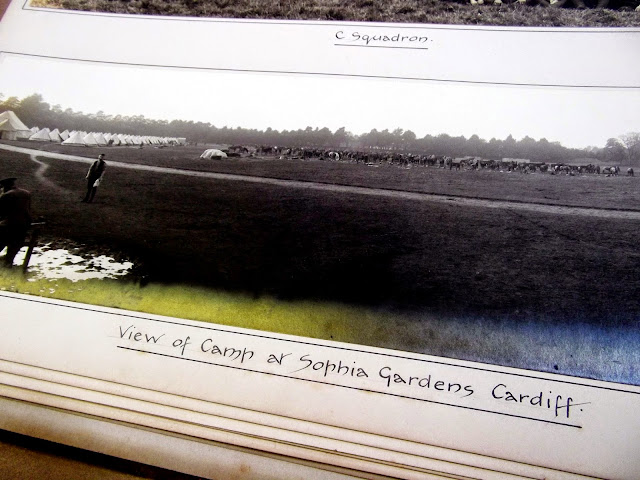 The second item I showed comprised of three albums, possibly put together for promotional purposes for the Italian air craft manufacturer, Caproni. The factory was founded in 1908 [in Taliedo, near Milan] and during WWI, they developed a series of successful heavy bombers, used by the Italian, French, British and US air forces.
1.    Officine Caproni contains photographs of large Caproni factory spaces [interiors and exteriors]
2.    Aeroplani Caproni contains photographs of all manner of Caproni aeroplanes [many with machine guns attached]
3.    Smaller third album [blank cover] containing photographs of Caproni staff groups at work
This album also contains 5 typed sheets of paper listing the aeroplanes and giving all sorts of technical information. 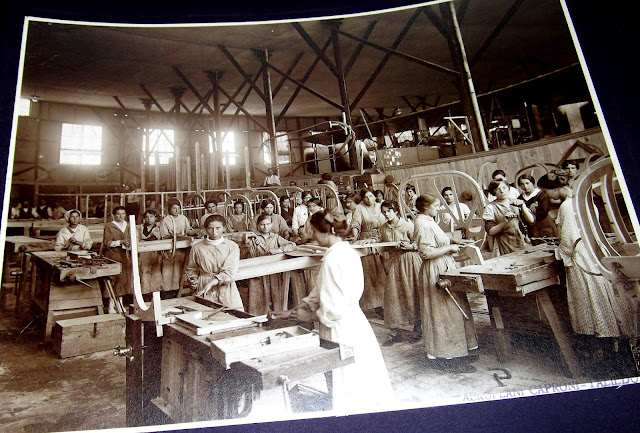 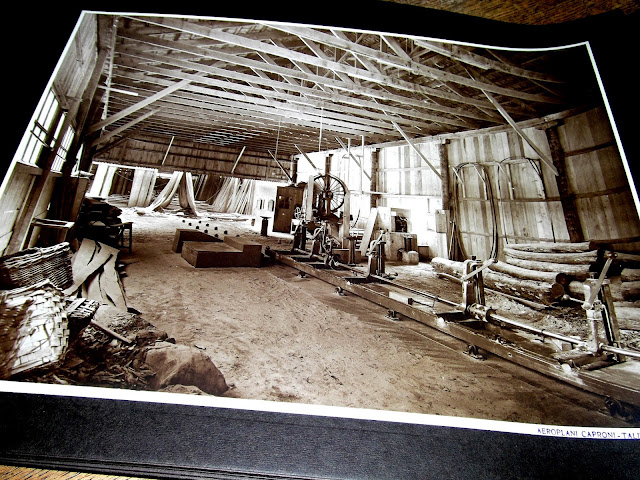 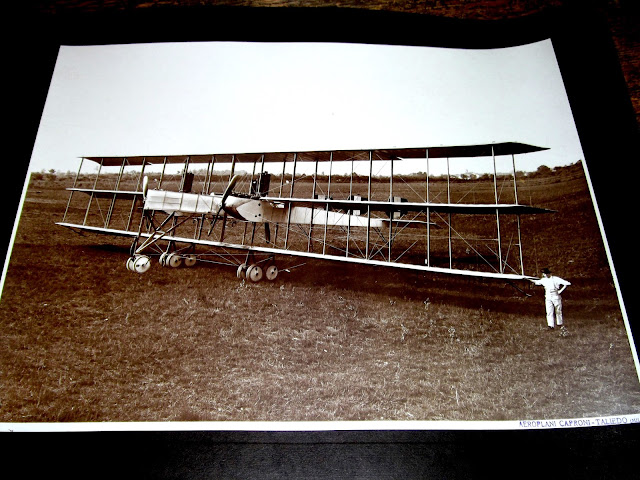 Further information on Caproni can be found via the following links:
http://en.wikipedia.org/wiki/Giovanni_Battista_Caproni

The last item I showed was one of our scrapbooks covering the war years that contains newspaper articles concerning the museum. These in particular, paint a vivid picture of an exceptional and turbulent period in the history of Amgueddfa Cymru – National Museum Wales. 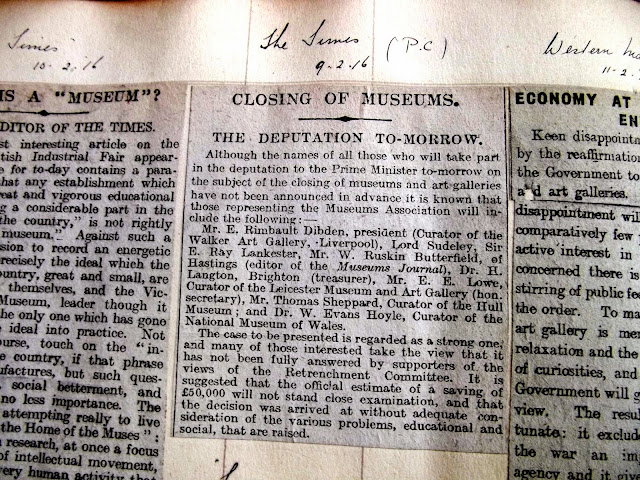 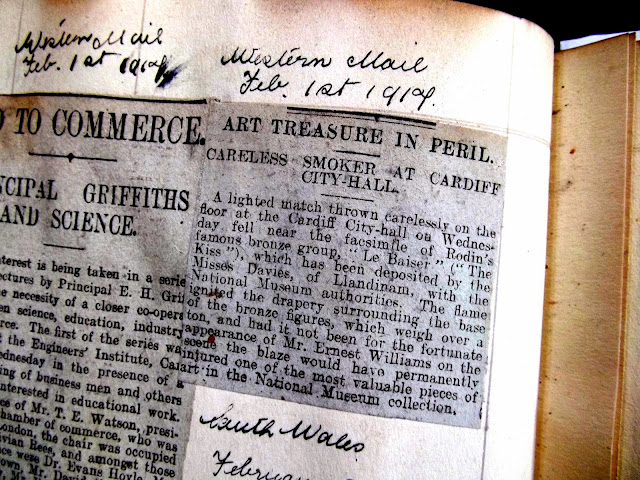 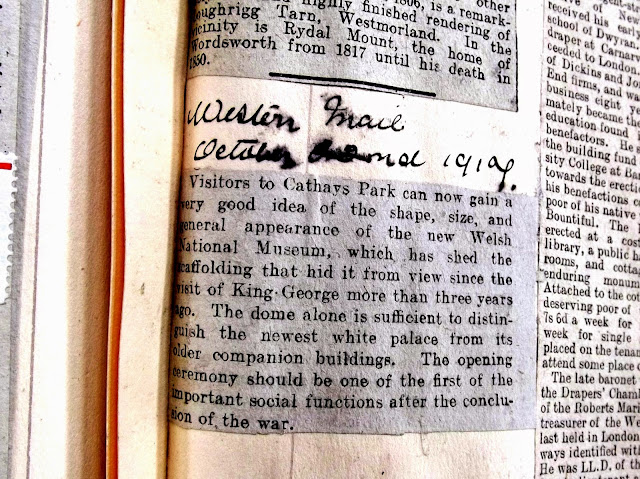 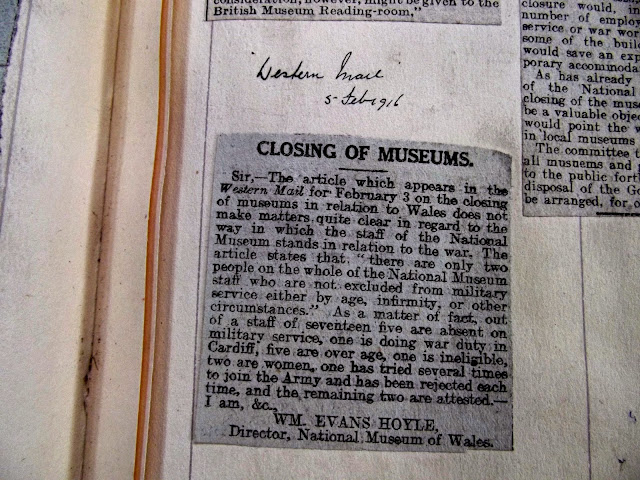